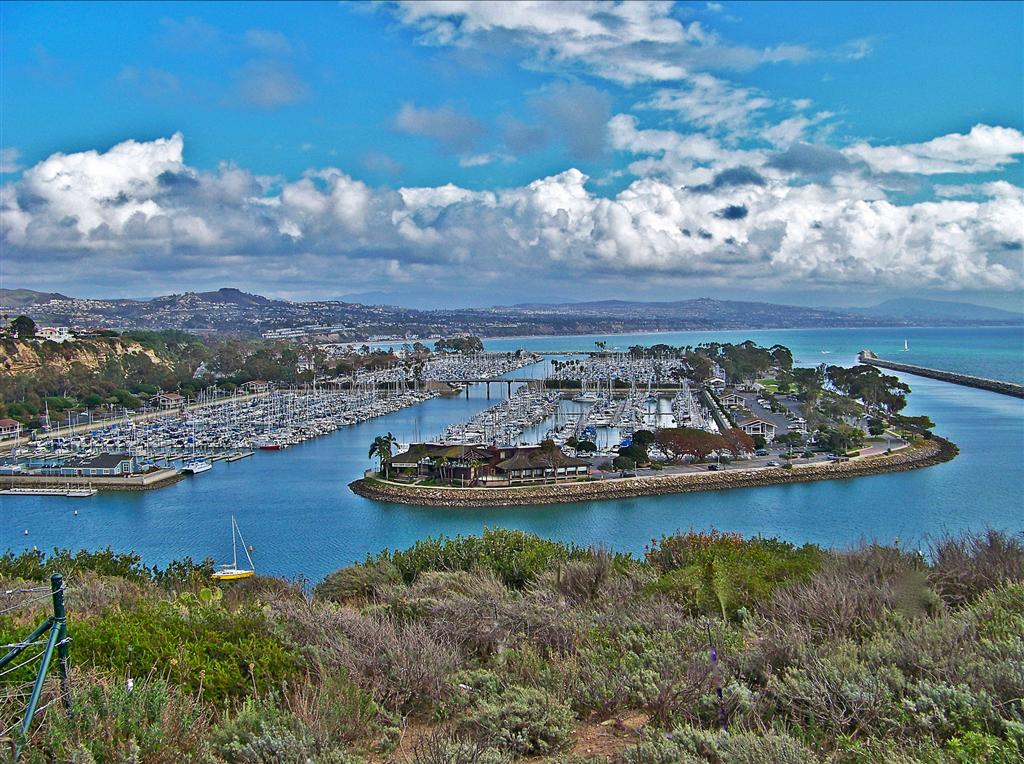 Incorporated in 1989, the City of Dana Point is named after Richard Henry Dana Jr. (1815-1882), a Harvard-trained lawyer, seaman, and author of the classic sea journal, Two Years Before the Mast (1840). In his journal, Dana documents his voyage from Boston around Cape Horn to California on the merchant ship, Pilgrim. Therein, Dana describes the area once known as Capistrano Bay, as "the most romantic spot in California." Today, Capistrano Bay is known as Dana Point.

Dana Point is characterized by nearly seven miles of prominent coastal bluffs and rolling hills along the Pacific Ocean. The most noteworthy of these bluffs is a unique promontory known as the Headlands, which overlooks Dana Point Harbor, one of the most significant landmarks of the Orange County coastline.

The original community of Dana Point had its origins in a housing development scheme in the 1920s, part of which can still be seen in the unfinished cement foundation for a hotel and bar that rests above the Dana Point Harbor, and which today is the centerpiece of a park. To get a real idea of how unrealistic expectations were back then, the bar was going to seat 1,500, but the hotel would only have beds for about 150 people. A tunnel was bored through the hill, down to what today is the Harbor, but it has been boarded up for years as unsafe. (The old ruins were always attractive to local teenagers, eager to explore).

The original plan for Dana Point was for a Spanish-style town with wide streets named after "Lanterns," and when the streets were laid out, there were actual lanterns for street lights, modeled on the old sailor's kerosene lanterns. This is still part of the community, in street names like Street of the Golden Lantern, Street of the Blue Lantern, and even a recent newcomer, Street of the Crystal Lantern.

The first homes were in the early California style, which was white adobe with red tile roofs. One of those first homes still stands on Blue Lantern, about a block away from Selva Road. Also, the location where today the Renaissance Cafe is situated was used by the developers to sell lots in Dana Point. Potential buyers would come in from Los Angeles, and after a cozy meal, one of the locals would explain how luxuriant the area was, in the hopes of attracting sales. Then, the Stock Market Crash of 1929 hit and wiped out the developer, and put a halt to all plans. The hotel and bar were never finished, and most of the homes were not built until decades later.

Other local remains of the original 1923 Dana Point development can be found at the lookout point at the end of Ruby Lantern (on top of the bluff overlooking the Harbor). And the Spanish-style office complex at the northern-most place where Pacific Coast Hwy. splits off, and becomes two one-way only streets. Additionally, the building behind A's Burgers is also the remains of an old gas station, that was probably associated with the old Villa motel, both being built in the 1920s.

Dana Point Harbor provides slips and mooring for over 2,500 boats along with over 50 specialty shops and restaurants. The Harbor attracts thousands of visitors annually for shopping, sport fishing, walking, bicycling, parasailing and a host of recreational activities. The Dana Point Harbor is also considered the gateway to Doheny State Park, one of California’s most popular beach facilities. The 62-acre State Park offers camping, picnicking, swimming, surfing, bicycling, tide pool exploration and more.