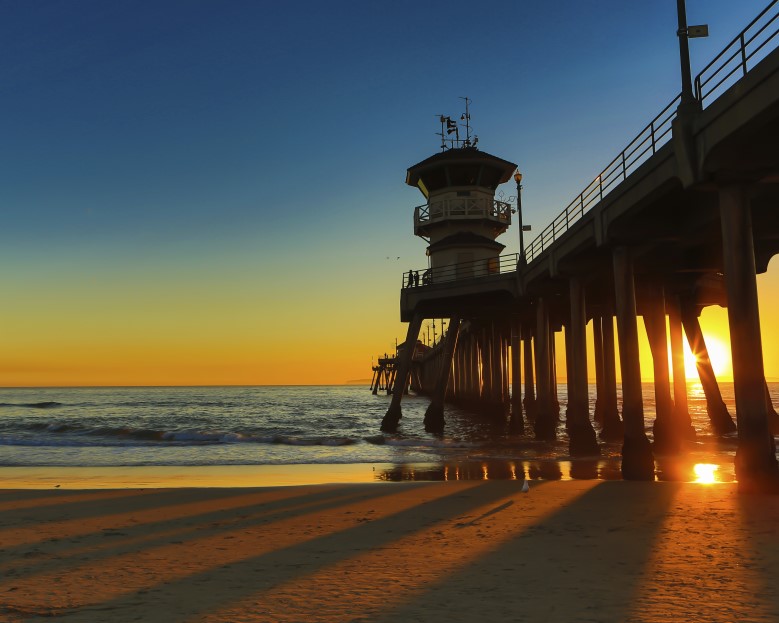 It is known for its long 8.5-mile beach, mild climate, and excellent surfing. The waves are a unique natural effect caused by edge-diffraction of ocean swells by the island of Catalina, and waves from distant hurricanes.

While Huntington Beach retains its 15-year trademark of Surf City Huntington Beach, the Huntington Beach Conference and Visitors Bureau filed four applications to register the “Surf City USA” trademark in November 2004. The idea was to market the city by creating an authentic brand based on Southern California’s beach culture and active outdoor lifestyle while at the same time creating a family of product licensees who operate like a franchise family producing a revenue stream that could also be dedicated to promoting the brand and city.

The downtown district includes an active art center, a colorful shopping district, and the International Surfing Museum. The Huntington Beach Pier stretches from Main Street into the Pacific Ocean. At the end of the pier is a Ruby’s Diner.

Apart from sponsored surf events, Huntington Beach has some of the best surf breaks in the State of California and that of the United States. Huntington Beach has four different facing beaches: Northwest, West, Southwest, and South. Northwest consists of Bolsa Chica State Beach with a length of 3.3 miles (5.3 km), the West consist of “The Cliffs” or “Dog Beach”, Southwest is considered everything north of the pier which is operated by the City of Huntington Beach. South consists in everything south of the pier which primarily focuses on Huntington State Beach (2.2 Miles), which almost faces true South.

Huntington Beach is also a popular destination for kite surfing, and this sport can be viewed on the beach northwest of the pier.

Huntington Beach is the host city of the National Professional Paintball League Super 7 Paintball Championships. The NPPL holds its first event of the year traditionally at the end of March.

Huntington Beach also hosts the annual Surf City USA Marathon and Half-Marathon, which is usually held on the first Sunday of February.