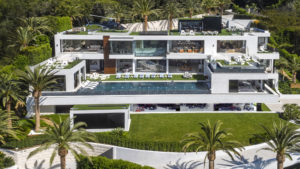 The Bel-Air mansion built on speculation stands four stories tall with a bowling alley, an auto lounge, three kitchens and an 85-foot-long swimming pool.
Bruce Makowsky / BAM Luxury Development
The home was built by owner-developer Bruce Makowsky “on spec,” meaning it was designed and developed without a buyer lined up.

The handbag tycoon builds residences for billionaires — nine in the last six years — in a 10-mile radius that includes the most exclusive pockets on the Westside.

He carefully curates every detail of the house, from the different stones in the bathrooms to the kinds of Champagne stocked in the two wine cellars. The effort is the culmination of his own extravagant travels, his interests and taste. “I live the life,” he said during a tour of the home last week.

Four years in the making, the contemporary glass-walled home is the product of 250 workers. Makowsky was inspired by the sharp increase in wealth am 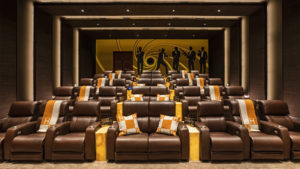 ong the world’s richest people and his love of ships.

That discrepancy, he said, didn’t make sense, so he created a home with finishes and furnishings reminiscent of a mega-yacht and a matching price point to boot. Nautical themes are present, as are motifs that reflect Makowsky’s love of collectible cars, guns and guitars.

But unlike his other recent high-profile project — the modern Beverly Hills showplace that sold in 2014 to Minecraft creator Markus Persson for $70 million — this place is less testosterone-fueled and more family-friendly.

There’s an interactive art installation of the Seven Dwarfs. A Hobie Cat sailboat sits on a deck ready for imaginary voyages. Topping it all is an actual helicopter with redone upholstery. The chopper was set in place by a crane.

Makowsky is a risk-taker when it comes to real estate investments, with no outside investors. 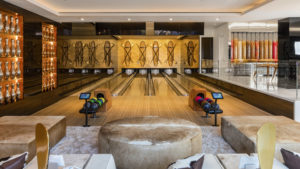 o expense. When he says the mansion “comes with everything,” he means it — including seven full-time staff that he will pay for two years.

Extra perks such as live-in employees or a big-ticket luxury item often are used to entice the right buyer.

“It helps that the house is fully furnished with a name brand,” said Paul Czako of Gussman Czako Estates, who listed the Scheinman property. “It attracts buyers from overseas and carries cachet.”

So far, Makowsky has attracted more than half a dozen potential buyers. Wearing a suede jacket akin to a modern Willy Wonka, he led a group through the home last week, showcasing its opulent elements while concert footage from Beyoncé and Katy Perry blasted on screens throughout thehouse. 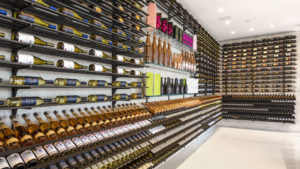 The audio-video equipment is top-notch (Makowsky has his own tech company); the rooms are flooded with entertainment systems and televisions. Dramatic city-to-ocean panoramas are displayed on each of the four levels.

Also of note are the exterior water features. “The entire house floats on water,” he said. That isn’t exactly true, but it does give that appearance, with surrounding moat-like canals.

He envisions a buyer who’s a bit of a homebody, someone who appreciates a house on steroids and sees little reason to venture into town. “You’re close to heaven, and you never want to leave,” he said.

Instead of the caviar-and-Champagne parties that usually accompany mega-mansion open houses, Makowsky plans to show the home only to prospective buyers by appointment only.

The quarter-billion-dollar question is: Who will buy it?

Nine-figure price tags are accessible to only a handful of local residents and a small market outside of that. As of 2015, there were 585 billionaires in the U.S., according to the research firm Wealth-X, and about 2,500 worldwide. 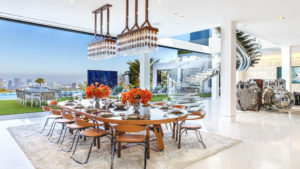 “The air is very thin at this segment of the market,” said Paul Habibi, a professor of real estate at UCLA.

But this is L.A. Fortune and wealth often can materialize overnight, whether from someone overseas looking for a p
lace to park his money or a tech titan riding the wave of a newly minted IPO.

Habibi doesn’t expect the buyer to come from the old-money crowd.

“Anybody who has had money for a long time knows better than to spend it on a $250-million house,”he said.